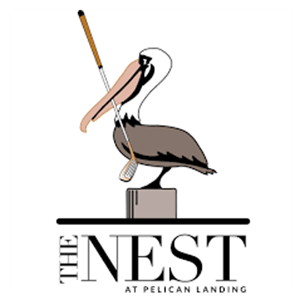 Pelican’s Nest is where the legends play. The original 18 holes, designed by master golf architect Tom Fazio, opened in 1985 to serve guests of the new Ritz-Carlton, Naples. A Golf Shop was the first structure to be built and later it was surrounded by a practice putting green and a separate, small clubhouse which contained a meeting room, bar and dining room. A small restaurant, called Redfish was built beside the eighteenth green over looking the back bay.

Pelican's Nest reputation for outstanding golf grew and in 1988 Mr. Fazio sculpted an additional nine holes. In December of 1993 the final nine holes were added and were named Gator, Hurricane, Panther and Seminole. The nines could be operated in any combination. In 1994, Westinghouse planned to develop a private course and incorporated nine of the Pelican's Nest holes for the new course.

A new clubhouse was designed by Dietrich & Associates out of Atlanta and completed in May of 2001. A renovation of the Grill Room and terrace was completed in 2007. The private club experience was further enhanced by our newly renovated, multi-million-dollar clubhouse completed in June 2020.

Our two, beautifully conditioned 18-hole courses offer diverse shot values and consistent playability. To appeal to all golfers ability and age, scoring tees were added to both courses in 2015. In 2015 and 2016 the greens and bunkers on both golf courses and the practice facilities were reconstructed and the infrastructure to begin using reclaimed water was installed. Members enjoy full practice facilities and a state-of-the-art golf shop staffed by courteous personnel.